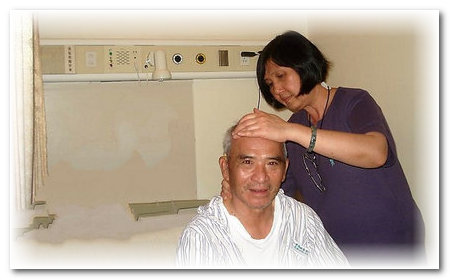 Migraines are thought to have many causes, ranging from physiological causes to stress and anxiety. However, irrespective of the cause, the physiological changes in the brain are common. This includes enlargement of blood vessels which causes inflammation, pain and further enlargement of the vessel. Migraine attacks commonly activate the sympathetic nervous system in the body, resulting in nausea, vomiting and diarrhea. Many people also experience sensitivity to light and sound.

Effects of migraine
Migraines are debilitating for those who suffer from them. Sometimes they can last for days at a time and this has not only an impact on the individual and their friends and families but also on their productivity at work.

Western medicine’s response
Most people who suffer with migraines have tried a wide range of medication before they find suitable relief. Typically the medication is a strong analgesic for pain. Medication may also target the other affects of migraine including nausea and vomiting.

The medication is strong and travels to all parts of the body. This has the risk of causing unwanted side effects as chemicals flood otherwise healthy body tissue and cells.

Traditionally trained acupuncturists will do a full assessment of your symptoms, triggers, treatments tried and so on. They will examine your muscles looking for blockages and areas where the muscle tightness is causing the spine to be misaligned. XRays and Ultrasounds (if available) can help with this process.

Acupuncture works because the needle stimulates the nerve endings in the muscle which in turn triggers the body’s normal healing response. The placement and use of the needle is critical. Acupuncture needles go directly to the muscle where the tightness is occurring. Once the tightness is released it enables the body’s natural healing processes to begin. The muscle is similar to a hose. If a hose is blocked then the water can’t flow, but unblock it and the water can flow to wherever it is needed.

Case Example (1)
At 45 years of age, Trudy was well established in her career. She was required to travel interstate frequently for meetings and conferences. This became quite difficult for her due to the frequency of migraines. Sometimes she would have a migraine for days, and occasionally more than a week. In between migraines she would have a lingering headache that never really went away. Despite the frequency and intensity of her headaches, Trudy kept going to work but it became increasingly difficult.

On a business trip to Melbourne she was hospitalised in order to get adequate pain relief for a migraine that she had had for several days. On returning home, she sought assistance via acupuncture. She told me that she was so desperate for help that she had been considering suicide.

The physical examination of Trudy showed that the muscles in her shoulders, neck, and back were very tight caused by stress in the workplace and the physical demands of carrying her laptop and briefcase. I used very gentle techniques during this first session in order to facilitate pain relief. The stimulation of the needles released the blockage quickly and during the session, Trudy opened her eyes about half way through and said “I can actually see you now”.

Trudy had several treatments over a 4-5 month period in order to help repair the long term damage done to her neck and shoulders. She is now free of migraines.

Case example (2)
Alison is a young woman in her late 20s. She experiences migraines which cause her to vomit, and she has extreme sensitivity to light. Alison attended the acupuncture clinic saying that she had experienced headaches her whole life. As a consequence she had not been able to participate in a whole range of activities that her peers enjoyed eg sport, sleepovers etc. She had headaches on average about 2-3 times a week and they were so bad that she was vomiting and unable to stand upright.

Acupuncture began and although she had relief instantly, it only lasted for 2-3 days. It seemed that there was some other causal factor involved in her headaches but she couldn’t remember any extraordinary event during her life that would explain why she had such an early history of headaches.

One day, her mother attended with her. I asked her mother for a history she said that when Alison was just 1 year old she fell down a flight of stairs. X-Rays showed no obvious signs injury but from that time onwards, Alison complained of headaches. This new information enabled me to target the real cause of Alison’s headaches. She had soft tissue damage which had never healed. I didn’t just need to help remove the blockages in Alison’s muscles I also needed to focus on repairing the muscle from a long term injury. Alison attended the clinic for 3more months before she was migraine free.

Press Ctrl + D to Bookmark this page for future reference.